Alfredo, and who on earth was he?

If you ask for Pasta Alfredo in a restaurant in Italy all you get from your waiter is a stare. Why is one of the most famous “Italian sauces” for pasta unknown in its country of origin? The answer is simple: because in Italy Pasta Alfredo doesn’t exist.

Yes, Italians make a dish of pasta, fettuccine dressed with nothing else than good aged parmigiano cheese and a lot of butter, but is such a simple preparation that Italians don’t even consider it as a “recipe”.

Waverly Root in his famous book “The Food of Italy” (New York, 1971) wrote: “FETTUCCINE AL BURRO is associated in every tourist’s mind with Rome, possibly because the original Alfredo succeeded in making its serving a spectacle reminiscent of grand opera. It is the same ribbon shaped egg pasta tat is called tagliatelle in Bologna; but the al burro preparation is very Roman indeed in its rich simplicity. Nothing is added to the pasta except grated cheese and butter - lots of butter. The recipe calls for doppio burro, double butter, which gives it a golden color.”

Who was Alfredo then? Alfredo di Lelio, this was his full name, was an inspired cook who proposed this new exciting dish in the restaurant he opened in Rome in 1914. It was a high gourmet preparation in the Roman tradition of simplicity. Apparently he created his Fettuccine all’Alfredo when his wife lost her appetite during her pregnancy. To bring back her appetite he prepared for her a nutritious dish of egg fettuccine with parmigiano cheese and butter. That probably gave him the idea for his “triple butter” fettuccine.

He was an extravagant character who used to personally serve his paper-thin fettuccine with golden forks, apparently donated to him by Mary Pickford and Douglas Fairbanks, the famous silent movie stars. In the fifties and sixties, Hollywood discovered Rome. Paparazzi photographers took photos of actors such as Tyrone Power, Ava Gardner, Richard Burton, Liz Taylor, or Sophia Loren in front of a plate of Fettuccine all’Alfredo, making his restaurant famous all around the world. The restaurant is now run buy his grandson, and the golden forks are still used to serve this dish for special occasions.

Samuel Chamberlain, journalist and food writer, met Alfredo in the late 50s and wrote in his book “Italian Bouquet – An Epicurean Tour of Italy” (New York, 1958): “Finally there is the great Alfredo, showman par excellence, who draws an endless file of amazed and hungry tourists to watch his calisthenics over a dish of hot noodles. The King of Noodles has come out of retirement, and now wields his golden fork and spoon at ALFREDO ALL’AUGUSTEO, at number 31 on the Piazza Augusto Imperatore. His Maestosissime Fettuccine all’Alfredo are most majestic, without a doubt. […] You have to visit this place at least once, we suppose, just to say you have seen this elderly, melodramatic good-hearted clown in action.” 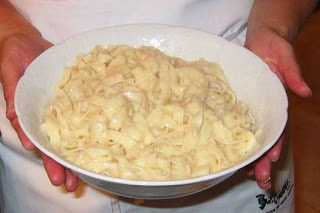 Prepare fresh fettuccine using my recipe on this page http://www.annamariavolpi.com/page31.html or substitute with one box Italian dry egg noodles (about 1/2 lb, or 225 gr).

Place half of the butter in a serving bowl, large enough to contain the pasta. Keep the bowl warm. 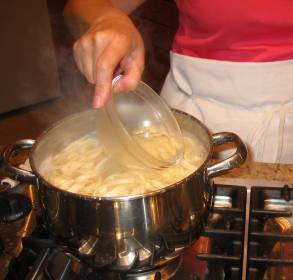 Cook the fettuccine in abundant salted water. When the pasta is perfectly al dente, (firm but not too soft or overcooked), reserve a few tablespoons  of the cooking water. 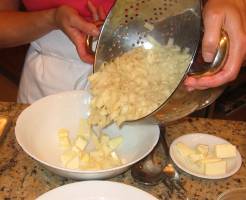 Drain without shaking the colander too much, so that the pasta doesn’t become too dry. Drop the hot pasta in the bowl over the butter. 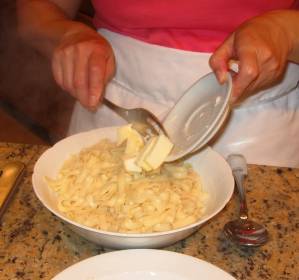 Add the rest of the butter and toss quickly to melt it. 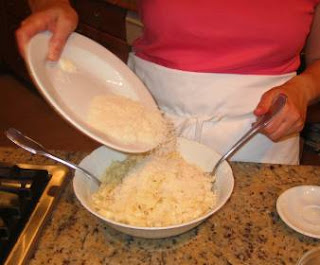 Email ThisBlogThis!Share to TwitterShare to FacebookShare to Pinterest
Labels: Pasta 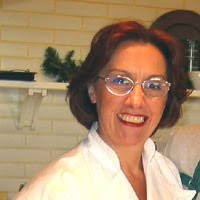 www.annamariavolpi.com
A unique cooking site, with all recipes illustrated step-by-step.
You will find traditional Italian recipes for tiramisu, pizza, pasta, lasagna, gnocchi, risotto and much more, articles on history of food and nutrition. 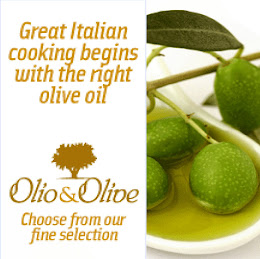